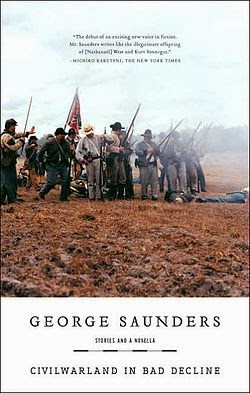 
"In this debut collection of seven dystopian fantasies, some of which have appeared in the New Yorker and Harper's, America in the near future is a toxic wasteland overrun by vicious thugs and venal opportunists who prey on the weak and misshapen. Saunders's feverish imagination conjures up images as horrific as any from a Hieronymus Bosch painting: a field full of braying mules toppled over from bone marrow disease; a tourist attraction featuring pickled stillborn babies; and cows with Plexiglas windows in their sides. The black humor and vision of American enterprise and evangelism gone haywire are reminiscent of Kurt Vonnegut's early works. In the novella "Bounty," for example, the clawed-foot narrator, who flees slavery under the "Normals" to find his sister, sees a McDonald's that is the headquarters of the Church of Appropriate Humility, aka "the Guilters." "In Guilter epistemology," he observes, "the arches represent the twin human frailties of arrogance and mediocrity." Despite the richness of the vision and the occasionally heart-melting prose, however, there is little difference in voice to distinguish one story from another. Read in one sitting, they blur into a bleak and unsettling vision of the world to come." 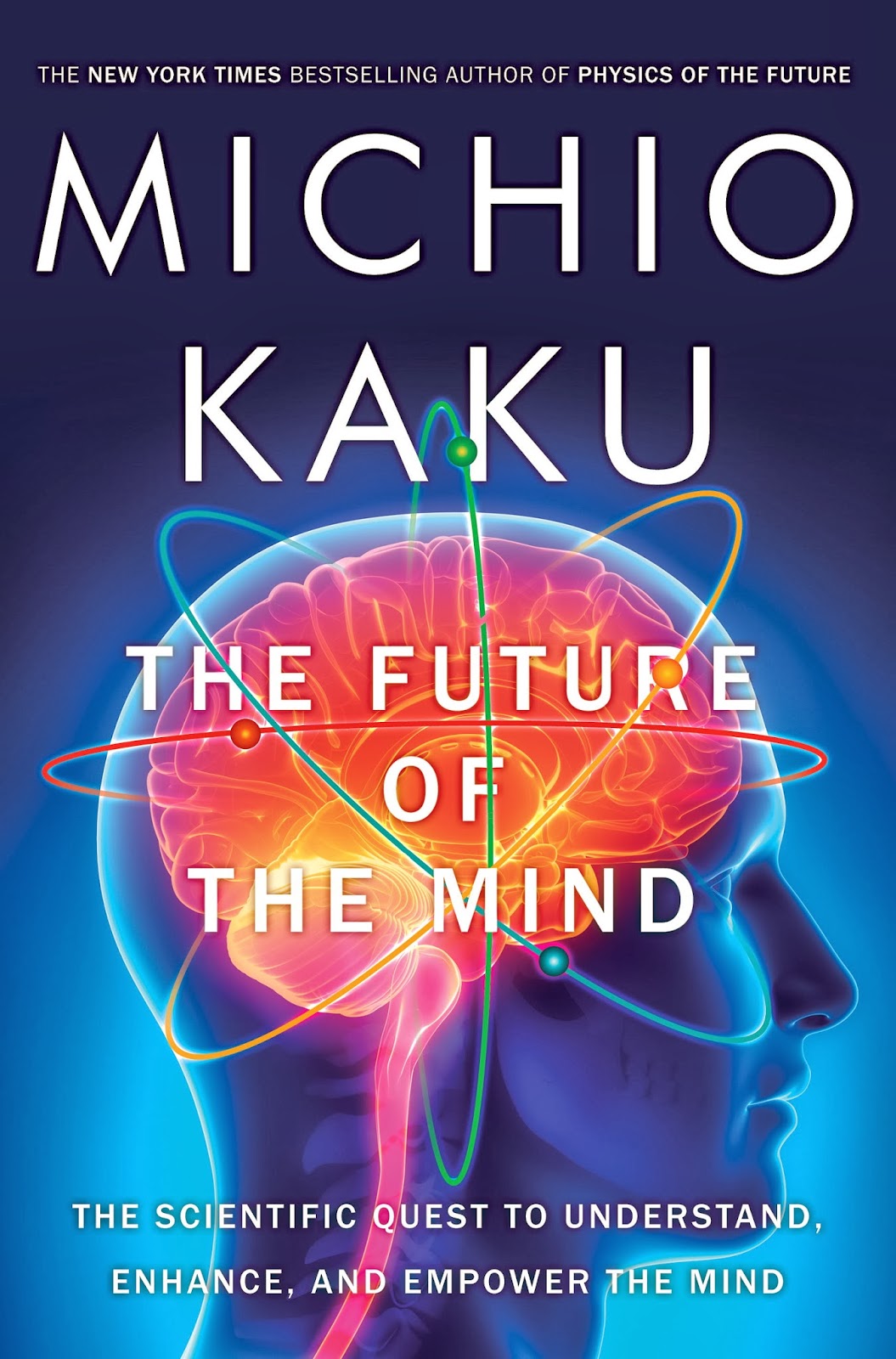 "The Future of the Mind: The Scientific Quest to Understand, Enhance, and Empower the Mind"
by Michio Kaku


"For the first time in history, the secrets of the living brain are being revealed by a battery of high tech brain scans devised by physicists. Now what was once solely the province of science fiction has become a startling reality. Recording memories, telepathy, videotaping our dreams, mind control, avatars, and telekinesis are not only possible; they already exist.
The Future of the Mind gives us an authoritative and compelling look at the astonishing research being done in top laboratories around the world—all based on the latest advancements in neuroscience and physics.  One day we might have a "smart pill" that can enhance our cognition; be able to upload our brain to a computer, neuron for neuron; send thoughts and emotions around the world on a "brain-net"; control computers and robots with our mind; push the very limits of immortality; and perhaps even send our consciousness across the universe.
Dr. Kaku takes us on a grand tour of what the future might hold, giving us not only a solid sense of how the brain functions but also how these technologies will change our daily lives. He even presents a radically new way to think about "consciousness" and applies it to provide fresh insight into mental illness, artificial intelligence and alien consciousness.

With Dr. Kaku's deep understanding of modern science and keen eye for future developments, The Future of the Mind is a scientific tour de force--an extraordinary, mind-boggling exploration of the frontiers of neuroscience." 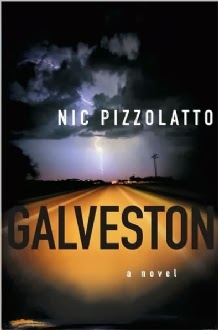 
"From the creator, writer, and executive producer of the HBO crime series True Detective, comes a dark and visceral literary debut set along the seedy wastelands of Galveston.

On the same day that Roy Cady is diagnosed with a terminal illness, he senses that his boss, a dangerous loan-sharking bar-owner, wants him dead. Known “without affection” to members of the boss’s crew as “Big Country” on account of his long hair, beard, and cowboy boots, Roy is alert to the possibility that a routine assignment could be a deathtrap. Which it is. Yet what the would-be killers do to Roy Cady is not the same as what he does to them, which is to say that after a smoking spasm of violence, they are mostly dead and he is mostly alive.

Before Roy makes his getaway, he realizes there are two women in the apartment, one of them still breathing, and he sees something in her frightened, defiant eyes that causes a fateful decision. He takes her with him as he goes on the run from New Orleans to Galveston, Texas—an action as ill-advised as it is inescapable. The girl’s name is Rocky, and she is too young, too tough, too sexy—and far too much trouble. Roy, Rocky, and her sister hide in the battered seascape of Galveston’s country-western bars and fleabag hotels, a world of treacherous drifters, pickup trucks, and ashed-out hopes. Any chance that they will find safety there is soon lost. Rocky is a girl with quite a story to tell, one that will pursue and damage Roy for a very long time to come.

Recalling the moody violence of the early novels of Cormac McCarthy and Denis Johnson, this powerful, potent, and atmospheric thriller is impossible to put down. Constructed with maximum tension and haunting aftereffect, written in darkly beautiful prose, Galveston announces the arrival of a major new literary talent." 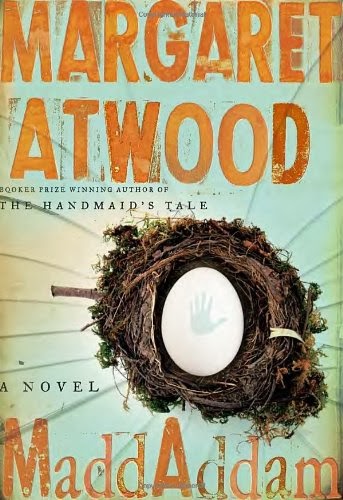 
"The final entry in Atwood's brilliant MaddAddam trilogy roils with spectacular and furious satire. The novel begins where Oryx and Crake and The Year of the Flood end, just after most of the human species has been eradicated by a man-made plague. The early books explore a world of terrifying corporate tyranny, horrifying brutality, and the relentless rape of women and the planet. In Oryx and Crake, the pandemic leaves wounded protagonist Jimmy to watch over the Crakers, a humanoid species bioengineered to replace humankind by the man responsible for unleashing the plague.

In The Year of the Flood, MaddAddamites wield science to terrorize corporate villains while God's Gardeners use prayer and devotion to the Earth to prepare for the approaching cataclysm. Toby, a God's Gardener and key character in the second book, narrates the third installment, in which a few survivors, including MaddAddamites, God's Gardeners, Jimmy, and the Crakers, navigate a postapocalyptic world. Toby is reunited with Zeb, her MaddAddamite romantic interest in Year of the Flood, and the two become leaders and defenders of their new community. The survivors are a traumatized, cynical group with harshly tested self-preservation skills, but they have the capacity for love and self-sacrifice, which in a simpler story would signal hope for the future of humankind.

However, Atwood dramatizes the importance of all life so convincingly that readers will hesitate to assume that the perpetuation of a species as destructive as man is the novel's central concern. With childlike stubbornness, even the peaceful Crakers demand mythology and insist on deifying people whose motives they can't understand. Other species genetically engineered for exploitation by now-extinct corporations roam the new frontier; some are hostile to man, including the pigoons—a powerful and uniquely perceptive source of bacon and menace. Threatening humans, Crakers, and pigoons are Painballers—former prisoners dehumanized in grotesque life-or-death battles. The Crakers cannot fight, the bloodthirsty Painballers will not yield, and the humans are outnumbered by the pigoons. Happily, Atwood has more surprises in store. Her vision is as affirming as it is cautionary, and the conclusion of this remarkable trilogy leaves us not with a sense of despair at mankind's failings but with a sense of awe at humanity's barely explored potential to evolve." 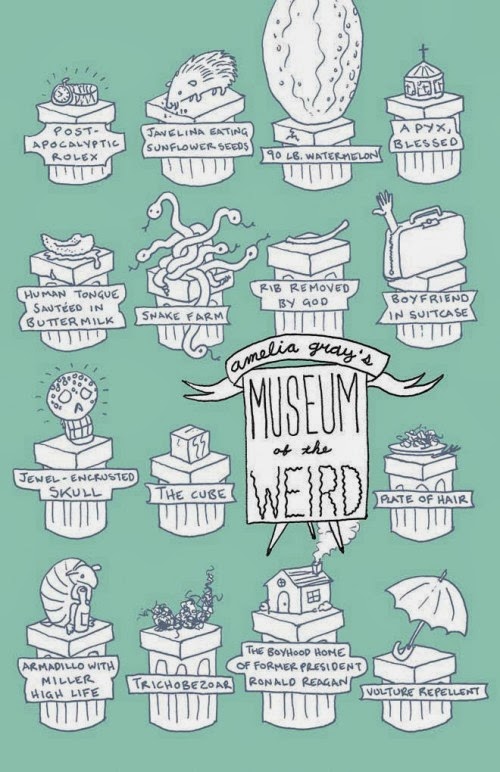 "Museum of the Weird" by Amelia Gray


"Cannibalism, serial killing, a snake farm, and medical oddities are among the topics covered in Gray's (AM/PM) award-winning second collection. Resisting conventional advice as to what should serve as legitimate fuel for fiction, Gray allows taboos and curiosities (including animals conversing in a bar) to hold court with viscerally affecting scenarios that rival Ripley's Believe-it-or-Not. A delicious taste for the absurd (a man who marries a bag of frozen tilapia; a woman who births a child per day over the course of several days) results in an accomplished take on the increasingly popular flash fiction form. Gray's 24 tales go well beyond the amuse-bouche, presenting eclectic personas with a macabre wit, challenging readers to suspend their disbelief, and mining deep emotional reserves beneath initially eye-catching material. What could be mistaken for sameness is instead a purposeful vision, relentless in its inquisitive march along the fringes of human solitude." 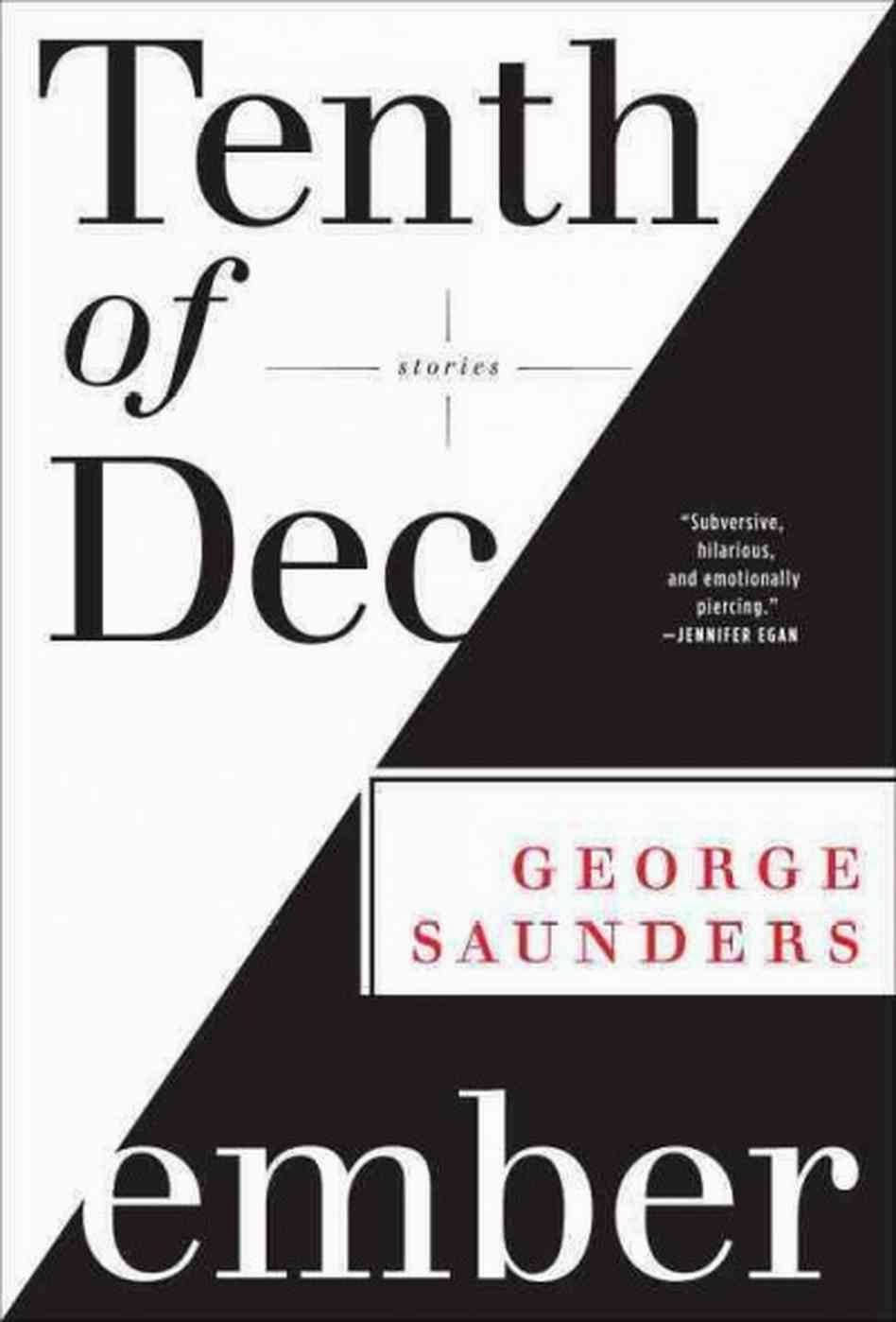 "Tenth of December" by George Saunders


"George Saunders' first short-story collection in six years, Tenth of December is as profound and moving as it is entertaining. Saunders' wonderful ability to portray a character's inner monologue--the secret voices, the little fantasies, the inside jokes, the spots of sadness--might be his greatest talent as a writer. But he is also expert at parceling out details to hook the reader and nudge the story in whatever direction he wants it to go. While these stories are generally more straightforward than we’re used to seeing from this author, the turns they take are constantly surprising. Saunders is an American original, a writer gifted at expressing the irony and absurdity all around us and inside us, but his ultimate goal is to show us something deeper: Our lives are composed of genuine experiences that deserve to be taken seriously." 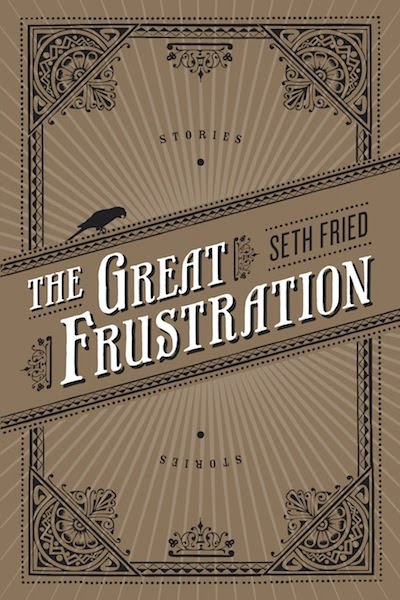 "The Great Frustration" by Seth Fried


"Channeling Steven Millhauser by way of George Saunders, The Great Frustration is a sparkling debut, equal parts fable and wry satire. Seth Fried balances the dark—a town besieged, a yearly massacre, the harem of a pathological king—with moments of sweet optimism—researchers unexpectedly inspired by discovery, the triumph of a doomed monkey, the big implications found in a series of tiny creatures.

In “Loeka Discovered,” a buzz flows throughout a lab when scientists unearth a perfectly preserved prehistoric man who suggests to them the hopefulness of life, but the more they learn, the more the realities of ancient survival invade their buoyant projections. “Frost Mountain Picnic Massacre” meditates on why an entire town enthusiastically rushes out to the annual picnic that ends, year after year, in a massacre of astonishing creativity and casualty. The title story illuminates the desires and even the violence that surges beneath the tenuous peace among the animals in the Garden of Eden.

Fried’s stories suggest that we are at our most compelling and human when wrestling with the most frustrating aspects of both the world around us and of our very own natures—and in the process shows why he is a talent to be watched." 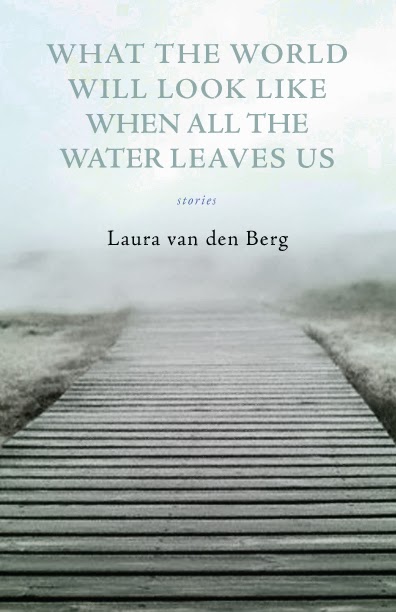 
"Containing work reprinted in Best Non-Required Reading 2008, Best New American Voices 2010, and The Pushcart Prizes 2010, the stories in Laura van den Berg's rich and inventive debut illuminate the intersection of the mythic and the mundane.

A failed actress takes a job as a Bigfoot impersonator. A botanist seeking a rare flower crosses path with a group of men hunting the Loch Ness Monster. A disillusioned missionary in Africa grapples with grief and a growing obsession with a creature rumored to live in the forest of the Congo. And in the title story, a young woman traveling with her scientist mother in Madagascar confronts her burgeoning sexuality and her dream of becoming a long-distance swimmer.

Rendered with precision and longing, the women who narrate these starkly beautiful stories are consumed with searching -- for absolution, for solace, for the flash of extraordinary in the ordinary that will forever alter their lives."