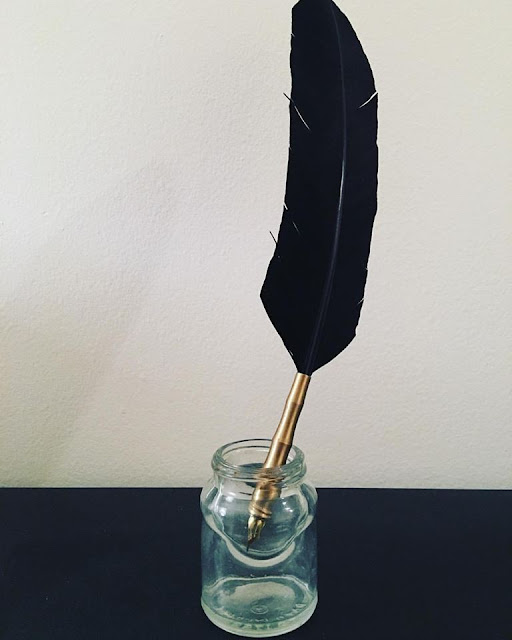 This is maybe a weird thing to admit, but I can't write at the moment. I haven't been able to sculpt language to do my bidding since I moved back to Kansas City.

Maybe I'm trying to force it, as a good friend suggested. Maybe I'm just not in the right head space because what I should be doing right now is reconnecting with my Midwest family, which I've been doing with some serious gusto as of late, leading to some pretty great nights out and some very exhausting days in the office. All very much worth it, however.

But it's had me thinking (for awhile) that, perhaps now that certain aspects of my life are back in balance, I am drawing less artistic "pain" from the reservoir, thus feeling less inspired. Other than finances, I really don't have much to complain about at all. I wonder if maybe my agitated headspace for so many years was the reason I was able to produce so much material, much of it dark and surreal in nature. Not because I'm an unhappy or dark person (I'm not), but because I find the dark corners of a room far more interesting to explore than the bright outdoors, speaking from a literary standpoint.

There will certainly be writer friends who say you don't have to be mired in this kind of emotional state in order to write, and they're correct. A writer writes no matter if they want to or not, no matter if they are inspired or not. I often deviate from these schools of thought. I like to be struck dumb by an idea so thoroughly that nothing can keep me from putting it to page. The piece becomes an obsession that I can't seem to finish fast enough (if at all) and many of the stories in my last collection arrived in that fashion. I also had the time to finish them, working two days a week due to a work shoulder injury.

For now, however, due to said conversation with the good friend and another friend's passing, I'm putting the writing on hold for the next year. I may try to rehash and rework a few stories that haven't been published yet, but beyond that, this year feels like one for re-connection more than anything else.

The Kansas City Dj/Club scene got news this week of a dear friend's passing. I hadn't seen him in many years, but we'd exchanged a few comments here and there across Facebook while I was in California and he was in Florida. Truly one of the most genuine people you could ever meet. I actually can't think of a time when I saw him out and about in a foul or sour mood.

I don't know all the details of his death and, if I did, I doubt I'd post them here. But his funeral service is on Saturday. I was supposed to do training for a new job at the same time as the funeral service, so obviously I won't be doing that now. I think the stark contrast of those two events against each other is a pretty great reminder of what's important: people over work, friendship over money, community over self.

There will be many at his funeral service that I haven't seen in a very long, long time. And while the circumstances are sad beyond belief, it'll be good for all of us to reconnect and reevaluate our own lives. Maybe we'll hold each other a little longer next time, maybe we'll second guess our decision to stay at home remaining comfortable and, instead, go out to make a little magic in the moonlight.