(Review) Matt Bell's "How They Were Found" 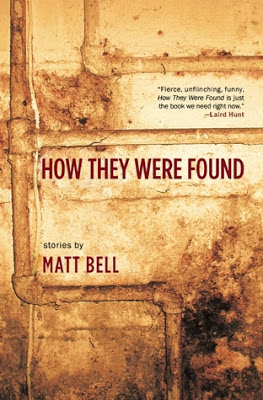 "How They Were Found"
by Matt Bell
238pgs
Keyhole Press Books

I've been on a kick recently, trying to find short story collections by little-known authors or those better known on the far outskirts of the literary canon, people pushing beyond just pure narrative and reconfiguring text to suit their own needs. Matt Bell's "How They Were Found" sounded like something I would enjoy immensely, if only for the imagination if not for the writing. As far as I'm concerned, he delivered on all counts.

The majority of the collection (13 stories total) are longer pieces than I'm typically used to reading, but each piece was as engaging, if not more so, than the one that preceded it, which was a nice surprise. Often a collection can lose steam towards the final push if the pieces aren't placed properly, and while I was less enthused by two or three of the stories, the remaining ones made me an instant fan and I will certainly be checking out more of his work.

"The Cartographer's Girl" was a wonderful introduction, utilizing map notations and symbols in an effort to deconstruct a past relationship, of which there is still some mystery left lingering in the air.

"X:
X is the store where he bought the ring he never got to give her.
X is the place where he planned to propose, where he already made the reservation.
X is the speech he rehearsed, that he practiced saying slowly, carefully, so that she would not mishear even a single syllable.
X is nowhere, X is now, X is never mind.
X is everything that ever mattered.
X is all he has left." 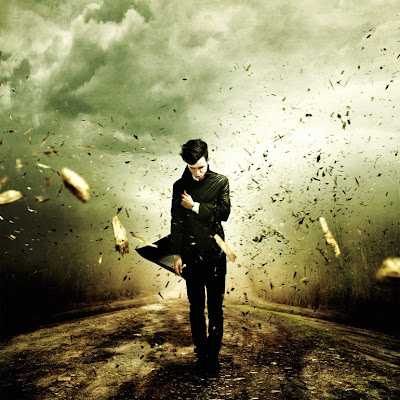 "The Receiving Tower" seemed to be after some great "event," putting us in a snowy region with a small battalion of soldiers who were slowly losing their minds and their memories, forgetting not only their names, but their entire histories and how they ended up where they are.

"As I remember it - which is not well - young Kerr was the first to grow dim. We'd find him high in the tower's listening room, cursing at the computers, locking up console after console by failing to enter his password correctly. At night, he wandered the barracks, holding a framed portrait of his son and daughter, asking us if we knew their names, if we remembered how old they were. This is when one of us would remove the photograph from its frame so that he could read the fading scrawl on the back, the inked lines he eventually wore off by tracing them over and over and over with this fingers, after which there was no proof to quiet his queries."

"His Last Great Gift" was an unbelievably dark piece about 19th-Century minister building a machine that would be the supposed coming of God. More than just a commentary on religion through science fiction tropes, Bell does a great job of explicating the relationships between the members of this religious sect as their lives come into constant contact with each other.

"He says, When God created the world, did he try over and over and over again until he got it right? Are there castaway worlds littering the cosmos, retarded with fire and ice and failed life thrashing away in the clay?

No, there are not.

When God came to save this world, did he impregnate all of Galilee, hoping that one of those seeds would grow up to be a Messiah?

No. What god needs, God makes, and it only takes the once." 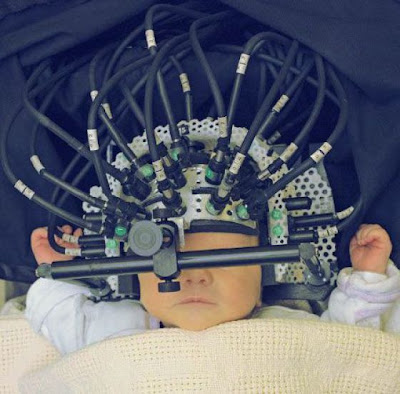 But it is "Dredge" that curled my toes back the most out of this entire collection. We follow along with the narrator as he first finds a body in a lake, removes the body, and takes it home with him, taking off on some kind of twisted detective noir tale in suburbia. Truly one of the creepiest things I've read and I appreciated the deep psychological explication of the character as things move along. While a "normal" person may not agree with every action that occurs, there's an understanding that comes by the final page that's disturbingly sweet. 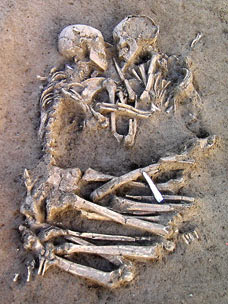 There are several other solid stories here ("An Index of How Our Family Was Killed" was a particularly inspired piece), but these were the ones that really stood out to me. The entire collection as a whole is really solid and even the longer pieces didn't make me feel like I was trudging through them; I was genuinely enjoying them. "How They Were Found" is highly unsettling and highly enjoyable. I'd scoop up everything of his that you can find.

I've been slow on posting new stuff, but I've been reading through a fantastic "trilogy" by Carlos Ruiz Zafon recently. Beginning with "The Shadow of the Wind," then "The Angel's Game," and ending on "The Prisoner of Heaven." All pretty good books, but the last of the series was half the size of the first two and felt rushed (probably more by Zafon's publishers than the man himself). Regardless, all three were fantastic reads.

I've also been trying to pump out more stories for this collection I've been working on for the last year and a half now, so I've been trying to find new (to me) short story collections in a darker, more experimental vein. I've got a few coming to me in the mail that I'm super excited about. The first one to arrive, Matt Bell's "How They Were Found" has been an incredibly nice surprise thus far. Right up my damn alley and I couldn't be happier with his style, his imagination, or with his prose.


Matt Bell - "How They Were Found"

"In his debut collection “How They Were Found,” Matt Bell draws from a wide range of genres to create stories that are both formally innovative and imaginatively rich. In one, a 19th-century minister follows ghostly instructions to build a mechanical messiah. In another, a tyrannical army commander watches his apocalyptic command slip away as the memories of his men begin to fade and fail. Elsewhere, murders are indexed, new worlds are mapped, fairy tales are fractured and retold and then fractured again. Throughout these thirteen stories, Bell’s careful prose burrows at the foundations of his characters’ lives until they topple over, then painstakingly pores over the wreckage for what rubbled humanity might yet remain to be found." 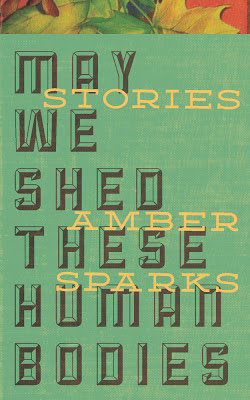 Amber Sparks - "May We Shed These Human Bodies"

“May We Shed These Human Bodies” peers through vast spaces and skies with the world's most powerful telescope to find humanity: wild and bright and hard as diamonds. Here is humanity building: families reconstruct themselves, mothers fashion babies from two-by-fours and nails, boys make a mother out of leaves and twigs and wishing. Here is humanity tearing down: a wife sets her house on fire in revenge, a young girl plots to kill the ghosts that stalk her, a dying man takes the whole human race with him. Here is humanity transforming: feral children, cannibalistic seniors, animal wives - a whole sideshow's worth of oddballs and freaks."

"Simon, a middle-aged architect separated from his wife, is given the chance to live out a stereotypical male fantasy: freed from the travails of married life, he ends up living with three nubile lingerie models who use him as a sexual object.

Set in the 1980s, there's a further tension between Simon's desire to exploit this stereotypical fantasy and his (as well as the author's) desire to treat the women as human beings, despite the women's claims that Simon can't distinguish between their personalities.

Employing a variety of forms, Barthelme gracefully plays with this setup, creating a story that's not just funny—although it's definitely that—but actually quite melancholy, as Simon knows that the women's departure is inevitable, that this "paradise" will come to an end, and that he'll be left with only an empty house, booze, and regrets about chances not taken."

"In the literary world, there is little that can match the excitement of opening a new book by David Markson. From "Wittgenstein’s Mistress" to "Reader’s Block" to "Springer’s Progress" to "This Is Not a Novel," he has delighted and amazed readers for decades. And now comes his latest masterwork, "Vanishing Point," wherein an elderly writer (identified only as "Author") sets out to transform shoeboxes crammed with notecards into a novel — and in so doing will dazzle us with an astonishing parade of revelations about the trials and calamities and absurdities and often even tragedies of the creative life — all the while trying his best (he says) to keep himself out of the tale. Naturally he will fail to do the latter, frequently managing to stand aside and yet remaining undeniably central throughout — until he is swept inevitably into the narrative’s startling and shattering climax. A novel of death and laughter both — and of extraordinary intellectual richness." 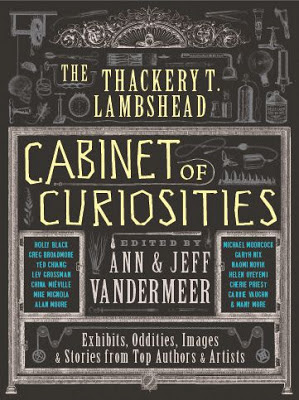 "You’ll be astonished by what you’ll find in “The Thackery T. Lambshead Cabinet of Curiosities.” Editors Ann and Jeff Vandermeer have gathered together a spectacular array of exhibits, oddities, images, and stories by some of the most renowned and bestselling writers and artists in speculative and graphic fiction, including Ted Chiang, Mike Mignola (creator of “Hellboy”), China Miéville, and Michael Moorcock. A spectacularly illustrated anthology of Victorian steampunk devices and the stories behind them, The “Thackery T. Lambshead Cabinet of Curiosities” is a boldly original, enthrallingly imaginative, and endlessly entertaining entry into a hidden world of weird science and unnatural nature that will appeal equally to fantasy lovers and graphic novel aficionados." 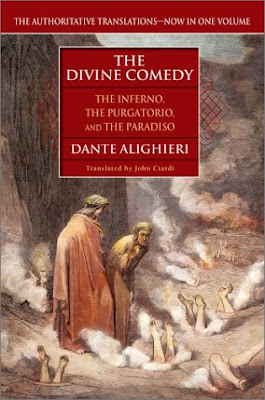 "The historical and cultural significance of Dante Alighieri’s masterpiece “The Divine Comedy” cannot be overstated. Dante’s poetry takes the reader on a multi-layered journey, one through which he or she experiences this literary master s unique aesthetic and spiritual sensibilities. “The Divine Comedy” also presents the opportunity to gain a deeper understanding of medieval Italian thought and its bearing on Western theology and culture. This lyrical allegory of a journey from the depths of Hell to Paradise is a moving read in its own right and its influence upon world literature unchallenged."