The Pervasive (and Vitally Important) Nature of Language Today 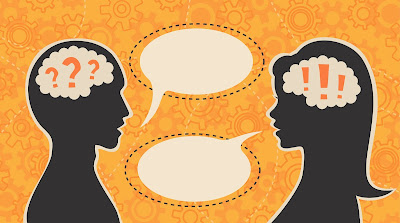 Language has a problem...and it is us.

I don't think I'm being hyperbolic when I say that we've not only butchered language in many ways (Twitter and text speak, anyone?), but we've also gotten very, very good at layering words and phrases to have multiple meanings.

Practicing linguists probably find this evolution interesting, and in its own right, it absolutely is at the purely academic level. But once we dive headlong into the ramifications of where language seems to be heading, it stops being academic and starts being indicative of something else, something far less pure. Every culture has its own subculture(s) of language evolving up and out into thousands of nuanced levels of slang. In medicine, politics, even just the most basic of corporate offices, language is used to both simplify complex conversations and communicate without being offensive (usually).

But what I want to focus on is the use of language throughout the current electorate. We now have an election process that lasts for an ungodly long 18 months (if not longer, in some cases). Throughout the course of this time frame, we the people are bombarded with campaign slogans and what used to be elevated trash-talking. This last election cycle may have been the worst on record, purely from an outside perspective. .

We were already at odds with each other politically through much of the social media world. I didn't think it was possible for the fever-pitch to achieve its own fever-pitch, but here we are in what can only be described as one of the most divisive times in American history (maybe world history as well, but that's for someone far smarter and more globally-minded than I to decipher).

I enjoy a good political discourse. Anyone who holds a different opinion than I do always has the opportunity to change my mind based on a few things: the argument/discussion is civil, there are clear, untarnished FACTS being presented, and we're still able to remain friends if the discussion ends in a stalemate where one of us has not convinced the other of our position. Evidence of these three things in most of the public debates I've seen is seriously lacking. In many ways, we can blame the anonymity of the internet (in regards to the comments sections of most news articles). But with Facebook, unless the discussion is completely public, we tend to know the people involved in the conversation. 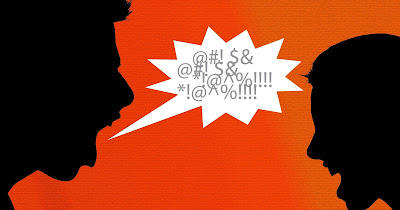 There's the old saying by Edward Bulwer-Lytton goes "the pen is mightier than the sword." In its original context, the phrase was meant to be empowering, meaning that communication (or the power of an independent press) is a more effective tool than violence. Taken out of context, one could also say that "words cut deeper than any blade is able," and we're getting very, very good at using language as a weapon rather than as a salve.

More often than not, I've seen the political arguments devolve into baseless, presumptive name calling. Part of this is obvious frustration at one party's denial of irrefutable evidence that their position (often also their opinion) is incorrect. Other times, this devolution is based purely in cognitive bias; we believe what we believe and screw you for believing differently.

I'd love to say that I'm some bastion of the unbiased life. I am not. I have, early on, fallen prey to using language as a weapon. Whether aimed at a former lover or at someone who disagreed with me politically, the words acted in much the same manner and garnered the exact same ineffective result, only serving to make me look like a total asshole...which is exactly what I was in those moments.

The current president does us no favors in many ways. And full disclosure: I didn't vote for him, but I hope I'm treating all of this with as much neutrality as possible. Not only do most of his off-the-cuff comments lack a great deal of nuance, the lack of complexity in his language does very little to keep the elevated status of the White House.

Throughout the campaign, we saw and heard things at a linguistic level that essentially made him sound like every trolling Youtube commenter. The way he spoke about women, the way he treated the other candidates that shared stage time with him, and the repetition of zero-calorie phrases (tremendous, the best, et.al) are all fairly indicative of where we're at right now. Language no longer seems to mean anything.

There's the pervasive idea that politicians lie, and they do, so we as an electorate expect it. But when the lies are so obvious, then proven wrong, then double-down upon by the people in power, this is an immense problem in need of fixing. When the facts disprove your claim, you should be humble (and intelligent) enough to know when to apologize or retract your previous claim. If these continual lies are unintentional, they can be forgiven. If they are intentional, meant to divide and conquer further, then that is absolutely unforgivable. Using language in bad faith does no one any good save for the speaker.

We can certainly branch off into the unfortunate nature of news as a business model, but the way headlines in periodicals of all political stripes have become hyperbolic (and quite frankly, ridiculous) also does us no favors. They appeal to our deepest, but most easily accessible, biases. Are there some news outlets that favor one party over another? Certainly. Does every news outlet have a political bias? I'd argue no. I believe that mostly comes down to the individual except in cases of obvious political leanings on the part of the organization (Huffington Post, Fox News, etc.). 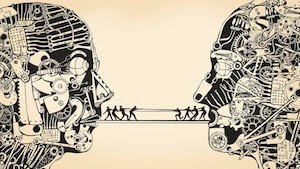 But here we are, wondering why we can't talk to each other while all the evidence is right there staring us in the face every day. We don't seem to care about language unless it does something inherently beneficial on our behalf. We need to break ourselves of this. We continue to use language as a weapon and we keep sharpening the blades like we're preparing for war when we should be preparing for deep, in-depth discussion instead.

There are plenty of instances I could continue to point to that show just how far down the rabbit hole we're going in terms of language being abused rather than being used to its full potential in better, more meaningful ways. And lord knows I'm constantly trying to be better about that myself, though I falter the way a normal person does. But I've also kept all the people I disagree with in my Facebook news feed. I find it more interesting to see their opinions, to engage them when I'm in the mood for a political conversation. I have no problems with changing my mind; having an opinion flipped on its head due to facts is how it's supposed to work. Your opinions aren't supposed to be set in stone, especially when there's evidence to the contrary.

But we should all be doing a better job of preserving and using language in better, less self-serving ways.